Anish Kapoor is having an exhibition in the Gladstone Gallery, very close to the metrostation Louisa. I heard the mayor of Brussels saying last month that he wants a work of Anish Kapoor to be the center piece of the renewed Place de la Brouckère (known from the Coca-Cola bill board), but I didn’t realize that he was having an exhibition in Brussels. I love his artwork so I was quite excited when I saw the announcement!

If you don’t know him, don’t worry. You might have seen a picture of his work Cloud Gate in Chicago, also known as the Chicago Bean. Never heard of it?  Then this is all you need to know: Anish Kapoor was born in India, but lives in London since the 70’s. He is known for his mirror-like sculptures that make you feel like you are going to fall over.  He plays with the feeling of dept and shows several dimensions. Let me show what I’ve seen at the gallery (click on the pictures for a bigger image). 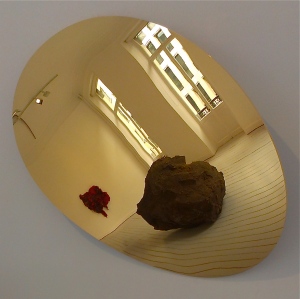 Mirror-effect in which you can see two other works. If you step aside, the whole image moves.

Rock sculpture made of earth.

Wax and silicone sculpture that looks like human tissue. A bit freaky when you look at the close-up.

I love this one. This works out so well with the white walls, high ceilings and big windows of the building. 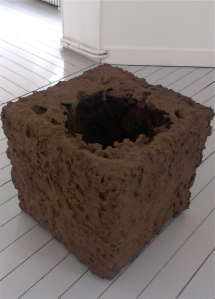 A red wax sculpture to end with.  There is another one in yellow, but Hey, I’m not going to show you everything ;).

You can still go see the artworks yourself until April 17, 2015. It’s a two-minute walk from Louisa and very easy to find. The Gladstone Gallery looks like a regular house, you have to ring the bell to get in. The nice thing about going to a gallery is that you are almost completely alone. You can take your time and take all the pictures you want. Oh, and it’s free! Don’t forget to visit part II of the exhibition at house number 6 in the same street, where you can find the biggest piece of the collection. I only discovered this when I got back home, but I will definitely go back to see it.

If you don’t get a chance to see Anish Kapoor’s work  in Brussels, he’s doing a solo exhibition in the Château de Versailles in Paris in June 2015. I hope you liked the article and maybe we will meet Kapoor’s work again at the Brouckère in the near future. Fingers crossed…

Feel free to leave a comment in English, Dutch or French.

This site uses Akismet to reduce spam. Learn how your comment data is processed.

KOMALIBXL is a cultural blog about Brussels. I write mostly about visual art that I see in museums, in art galleries, at art fairs, at exhibitions and in the public space. I’m really not an expert, but I hope that my enthusiasm is contagious. Writing about art is a learning proces for me and I see it as a challenge to broaden my knowledge. Besides the art scene I sometimes write about the broader city culture: shopping, concerts, restaurants and other things that inspire me in Brussels.